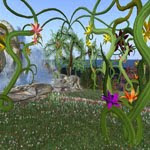 A long time ago, Linden Lab started a Flickr group devoted to images taken within Second Life's adult mainland of Zindra. The contributions to the group's pool have been fantastic (and still keep coming in!). So far we have over 50 members and a wide variety of photos. Having events like Art Maze, ZEXPO and other programs help to draw more photographers into the community and help build the artistic and positive profile of Adult Second Life.
The images from the Exploring Zindra pool are compiled into a slideshow format that is available online, but is also streamed direct into Second Life via special slideshow kiosks.
Visit the Exploring Zindra Flickr group now!
Posted by Boot Goddess Gina at 5:55 AM No comments:

Second Life Photographer Zada Bury has started an amazing photo blog with images of Zindra, the adult mainland. To begin, there are many sets of photos from ZEXPO 2011. We look forward to the exciting progress of this new blog!
Visit the Zindra Photo Blog now!

Other Zindra-related blogs
Posted by Boot Goddess Gina at 6:55 AM No comments: 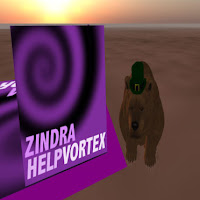 WANTED: BUILDING TEACHERS
wanted: anyone with good teaching/presentation skills to do a building workshop/class at the Zindra Help Vortex...contact any of the Vortex team for details

WANTED: BUSINESS LEADERS
wanted: anyone with good teaching/presentation skills to do a workshop/class at the Zindra Help Vortex on any business-related topic...contact any of the Vortex team for details
Posted by Boot Goddess Gina at 11:11 AM No comments: 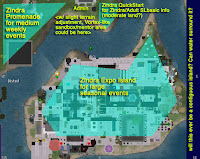 In 'honour' of Linden Lab's recent scheme to transform the ZEXPO Island area into a place that condenses the '4 Corners of Zindra' project into one, centralized hub for events, information and more, here is a vision of how this might look should Zindra Expo group manage such a complex.

1. The main island itself would remain for large seasonal events, continuing to provide the much-needed mass marketing efforts, that result in serious attraction and retention.
2. Across the water in Distrel would be a corner used for the 'Promenade', for medium sized events/exhibition designed to attract and retain specific niche markets with more frequency.
3. Across the water in Girenzi would be the 'QuickStart' welcome center, with the basic information about Zindra and Adult SL. The center would direct to the rest of the Complex but also direct to mainland Zindra in general and Adult SL in general. As with the original Podyan plan, effort would be made to research if this parcel could be rated Moderate to be more effective.
4. Small Admin facility
5. Terrain editing might be needed to accomodate, but an area much like the Zindra Help Vortex might also be added, (sandbox, mentors, outreach) between the Promenade and the Quickstart center.

While 'squeezing' the 4 Corners program into this space might be a challenge, I find that the centralization benefit could offset the detriments. From this Complex, the team could also initiate and manage many Zindra (and Adult SL) programs, such as the Bloggers Resource Program, Flickr Slideshow Program, various Brainstorming initiatives and much much more.

More about the vision for a Zindra Welcome Complex
Posted by Boot Goddess Gina at 11:59 AM No comments: 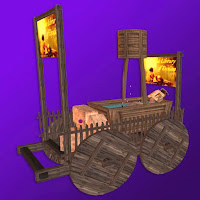 Congrats to Jazz Danitz from Library of Erotica for this amazing Float! This literary leviathan was our first-place winner! There was so many amazing float in the ZEXPO 2011 Forbidden Float Contest!
Posted by Boot Goddess Gina at 2:53 AM 2 comments:

ZEXPO 2011: Thanks to a great team that ran Zindra Expo

A large event event like ZEXPO 2011 is simply not possible without the efforts, creativity and commitment of a great team of talented individuals. Here are some of our fantastic leaders (in no particular order):

Huntress Catteneo
Huntress initially developed the Zindra Help Vortex's Sexy Speedbuild Galley presence at ZEXPO, and continued to do so much more, coordinating many of the show's aspects/

Temperance Hax
Tempy ran the Forbidden Floats contest and organized that entire aspect of show, then coordinated with SL groups to bring in an incredible amount of amusement rides and carnival games. So much of the 'carnival' element was aresult of Tempy's influence!

Silvanus Northman
Silvanus became our Quality Control Committee, helping with everything from fixing designs problems to helping exhibitors find locations. His tireless work was very inspirational as he sought to make each and every visitor's experience better.

Bady Boozehound
Bady was our strict by loving pre-screener, who took great care to investigate each exhibitor registration and ensure good quality applications. Bady worked well to develop the pre-screener process and made the lead-up time to ZEXPO far more plesant as a result.

Zada Bury
When Zada signed as leader of Photography Committee, it really only meant she had to make sure things were photographed (regardless of who did the work), but she she did SO much photo work herself! In fact, Zada became inspired and started a new photo blog all about Zindra! A real success story!

Kim Rongyu
Kim hosted our Business Networking element at ZEXPO 2011 which added a face to our plans to bring businesses together and promote inter-business growth.

Lapiscean Liberty
Lapiscean (from Aview TV) spent untold hours preparing a 24/7 video stream for ZEXPO and became more involved in the show's planning and production as it progressed, as well as active in Zindra affairs in general. While not an official ZEXPO team member at first, LAP is now being included whether he knows it or not!

Dancer Greenfield
DJ, musicologist and film trivia guru Dancer Greenfield compiled the radio commercials for this year's ZEXPO music stream and created the 24/7 audio content for the show. Thank you Dancer for all of your commitment!

BBQBill Odriscoll
Bill, who is always active and engaged in Zindra affairs, consistently helps out with projects and his assistance and support during ZEXPO's early planning days are very noted.
Hypatia Meili
Finally, our list ends (for now!) with a great contributor who added so much to the show with new ideas and content. Hypatia's energy and enthusiasm brought a great amount of excitement to ZEXPO 2011.

Thanks to all who supported and worked hard to bring ZEXPO 2011 to reality. Please anticipate more recognition in the days to come.
Posted by Boot Goddess Gina at 9:42 AM No comments: