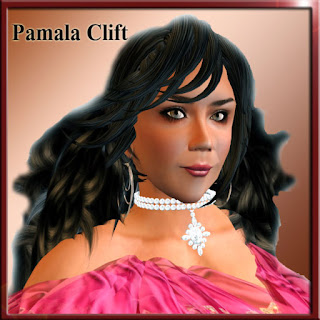 Author Pamala Clift will present a series of talks entitled 'The Realities of Virtual Relationships'. There will be Slides, talk & an open discussion afterwards. Pamala is one of our noted celebrity guests at ZEXPO, and she is well known for her published works, such as: 'The Virgins Handbook on Virtual Relations' as well as her company The Virtual Handhold, LLC, a RL company that does Human/Computer Mediated psychology for technology transistion for business, education and interpersonal understanding & transistions.
Pamala also runs an SL group, The Roadside Philosophers (who will also be present at the show). To quote Pamala,:
The Roadside Philosophers are a first person philosophical brainstorming group sharing ideas and perspectives using the virtual world as a metaphor in our search for truth.
We look forward to Pamala's contributions to ZEXPO!
Posted by Boot Goddess Gina at 9:18 AM No comments: 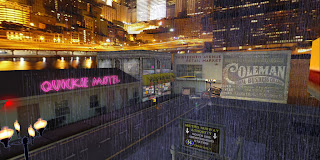 ZEXPO 2011 will feature three very different choices for accomodations this year, including the incredible Quickie Motel, an immersive experience that's a very affordable alternative (you only pay for clean sheets!).....The Quickie Motel will be nestled within Sin City, a seedy urban environment across the water from the main island. Are you brave enough to spend the night?
ZEXPO 2011 Main Entrance
Posted by Boot Goddess Gina at 11:16 AM No comments: 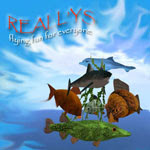 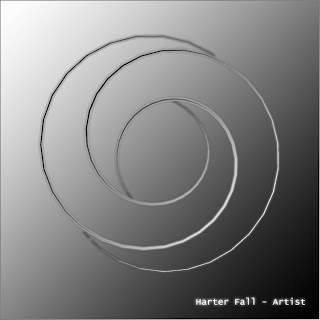 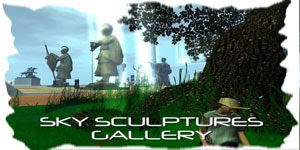 WE're excited to have some great artists present at ZEXPO 2011, with amazing 3D talent on display!
First, Really Scrabblebat (from Really's) creates some fantastic animals and we will be featuring his sea creatures ina special Sailing game, a Sea Creature Hunt!,,,
Then, renowned artist Ub Yifu (from Sky Sculptures Gallery) will be unveiling a special piece, create just for ZEXPO. (many of you hopefully caught his installation at Art Maze, earlier this year!),,,
Then, Harter Fall will dazzle you with his optical illusion sculptures, scattered throughought the fairgrounds....can you find them all?.....
This year we bring you more of the arts at ZEXPO.....in all their 3D wonder!
Posted by Boot Goddess Gina at 6:21 AM No comments: 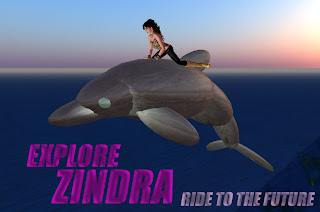 1. Continue to develop the 4 Corners of Zindra, putting small teams (3 people) in charge of each of the 4 Corners. (such as Vortex has now) This takes a LONG TIME because finding the right mix of reliable, responsible and mature people should not be rushed!
- Vortex has already started
- Zindra Promenade team will likely be next
- ZEXPO Island perhaps after that.....
- Zindra Quickstart perhaps last....
As these areas are begun and developed, the managing teams will slowly take over more responsibilities and will strongly connect with Zindra Expo to ensure long-term plans are kept.

2. Zindra Expo group remains the LL group that functions to weave the 4 corners together, providing central communication, nurturing growth, and ensuring a big-picture marketing plan. ZE is owned by LL, but should have a Zindra Director of Projects as a co-owner or Officer to help direct the overall developments.

3. ZE will also propose and develop additional projects to assist in the promotion and growth of Zindra, as long as those projects maintain a tradition of neutrality and inclusive opportunity, and have an emphasis on affecting Zindra's overall PR and growth, and that a good case of impact can be argued. Proposals for such projects will be made to LL as they have been done in the past.

Note:
While ZE will remain the official LL-owned group, special initiatives will be proposed to help seed and inspire many other resident-run groups that can help grow the business and community of Zindra. As with all ZE initiatives, the real point of these proposals will be to inspire.
Posted by Boot Goddess Gina at 8:14 AM No comments: 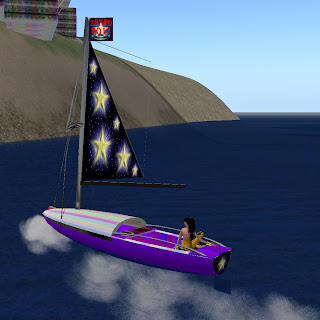 There will be many vehicle options at this year's ZEXPO, including these cute boats thanks to Moi Macarthur. Sail around the island and discover secret treasures......
Go To ZEXPO 2011 landing area
Posted by Boot Goddess Gina at 5:26 PM No comments: 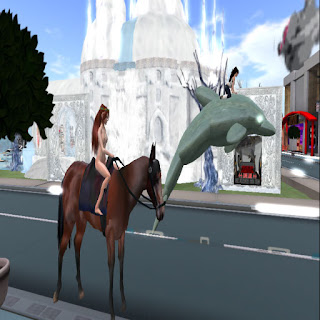 Of course we all know the story of Lady Godiva, an Anglo-Saxon noblewoman who, according to legend, rode naked through the streets of Coventry, in England, in order to gain a remission of the oppressive taxation imposed by her husband on his tenants.

But it was truly a challenging procession earlier on the Zindra continent when Janicka Engineer, roleplaying Lady Godiva, led us across all the regions of the Zindra on a daring procession, fighting a lot of lag, and i mean a lot! (i ended up inside a building basement and Lady Godiva had to tp me out, lol!)

It was truly an inspiration for all women and men everywhere. I can only imagine what the real Lady Godiva must have felt. In the end, we made it to the front of Zexpo 2011!

For those who missed it, i took a few pictures which i hope you will enjoy.
See The Flickr Gallery Here

If you want to know more about Lady Godiva, please follow this link. :)
http://en.wikipedia.org/wiki/Lady_Godiva
Posted by Boot Goddess Gina at 10:40 AM No comments: 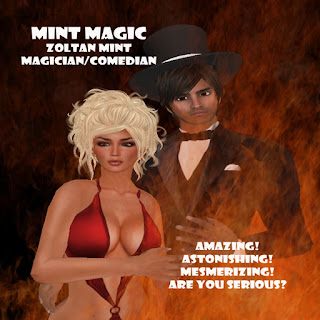 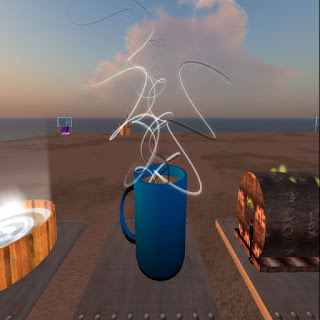 See some amazing photos from a recent edition of our weekly Sexy Speed Build Sundays Contest (every Sunday at 4PM SLT). this edition was entitled 'Steamy'!

This contest is free to join, open to any skill level and presented by Artist and Builder Temperance Hax

See All of the Photos
Teleport to the Zindra Help Vortex

OR within Second Life, open MAP and search for the region called Zindra Vortex
Posted by Boot Goddess Gina at 6:10 AM No comments: 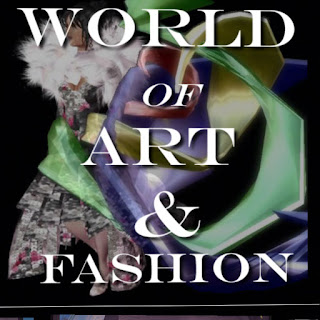 ZEXPO 2011 will feature many great exhibitors, including WORLD OF ART AND FASHION, a place for artists and retailers to display their art, fashion and more. Currently, WOAF has artists from France and the US with some wonderful RL art and SL art, two fashion retailers with some wonderful clothes and one photo studio for portraits. Run by artist Nicci Winsmore, World of Art and Fashion promises to be a great addition to the ZEXPO 2011 lineup!
World Of Art and Fashion BLOG
World Of Art and Fashion on Facebook
Posted by Boot Goddess Gina at 5:51 PM No comments:

Lady Godiva in Zindra: Join the Procession and See The Adult Mainland of Second Life 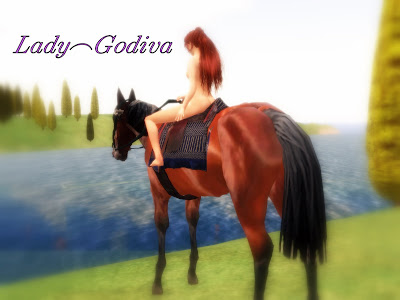 Second Life's first Lady Godiva Procession has begun!
Janicka Engineer leads the way in this weekly event, where Second Life residents can parade across the adult mainland of Zindra using the rideable, driveable vehicle of their choice. (yes, you can use a horse....or motorcycle...or flying dolphin?)

Lady Godiva Procession runs on Saturdays at 11AM
Join the group: Lady Godiva in Zindra
The parade starts here, in the Broadwater region
If you miss the procession start, IM Janicka Engineer to catch up!

Go to the Lady Godiva in Zindra blog and see the Events calender
Posted by Boot Goddess Gina at 6:19 PM No comments:

For Immediate Release
ZEXPO 2011 runs AUG 26 thru SEP 4
Celebrating the Adult Side of Second Life: Zindra and Beyond


ZEXPO is an annual convention/tradeshow/festival that takes place on a large region known as ZEXPO Island on the 'A' rated mainland of Zindra, in the virtual world of Second Life. The Island features a new large event every season and the ZEXPO show itself is an exciting convergence of merchants, performers, artists, play areas, famous personalities, speciality organisations and everything that represents SL's sophisticated adult side. ZEXPO is very inclusive and very innovative, mixing creativity and inspiration with business networking, education and hope for the future.

The concept of ZEXPO 2011 (and other events on the island) is one of positive PR and outreach for the adult mainland of Zindra. While Zindra is 'adult' land, it does not contain only 'adult content' (though adult content is certainly permitted.) and is often known as the most liberating place in SL. While ZEXPO 2011 is about promoting Zindra, it also welcomes non-Zindran content in an effort to cross-promote interests and reach out across more of Second Life and beyond. Some believe that a healthy adult mainland means a healthy adult SL which means a healthy SL.

This year's show features an emphasis on Creative and Active Investment, Adult Sophistication and a fun 'Forbidden Carnival' theme. Other innovations include a hotel booking system, where attendees will be able to obtain accommodations for the show's duration, a plethora of exciting Attractions and Mini-Events, and a Forbidden Float Contest, where exhibitors can create moving parade floats.

Chelsea Malibu Speaks At Vortex: 'Staffing For The Virtual Business' 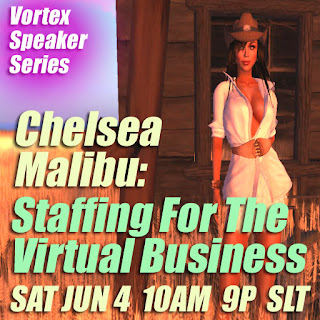 This June, The Zindra Help Vortex will present the first in its series of lectures and presentations designed to educate. stimulate and fascinate.

Chelsea has incredible experience running an 8-sim enterprise that employs over 100 and can share insights into the world of staffing. Invaluable!

https://sites.google.com/site/zindrahelpvortex/home/vortex-speaker-series
Posted by Boot Goddess Gina at 2:17 PM No comments: